You know what they say about buses, well.... Three fellow bloggers in 2 days is unheard of. Well it is for me anyway! So yesterday we said hello to Maffi on NB Milly M, and then this morning after leaving Hillmorton bottom lock who should sail past but NB Briar Rose with Adam and Adrian at the helm and, following closely behind, was NB Chance with Doug and James. Again only a brief conversation was had by us all but at least I can now say I have finally met them.

We decided not to go to far today, and after a brief stop at Rugby for the usual supplies, ( beer & wine ) we found a very quiet mooring just after bridge 35 at Hungerfield near All Oaks Wood. Did I say it was quiet?? Suddenly across the field from us a group of what I assumed were walkers strode purposely toward the wood. They were all carrying either sticks or flags and were flanged by numerous gun dogs. That rang alarm bells to me, as having lived  a previous existence near a farm which raised pheasants, I guessed what was about to occur. 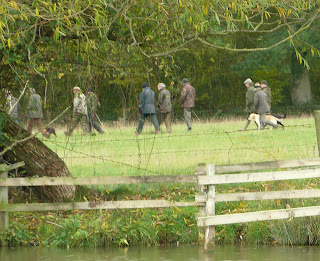 Not long after there were loud shouts, whistles and calls. Then came the sound of sticks being thumped hard on wooden posts. The beaters had arrived. 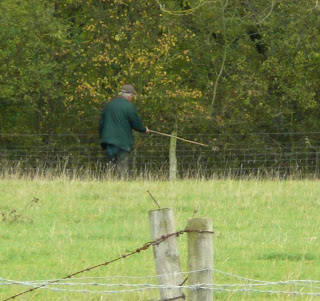 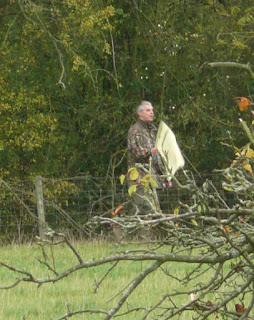 ﻿
Then came the sound of gunfire. Jade nearly jumped out of her skin and shot behind Ian's chair. Now, I saw the perfect opportunity to get Jade used to loud bangs without the quivering and shaking. So, cruel as it may seem, I took Jade out in the direction of the shoot and hoped for the best. Sure enough at first she tried to get back to the boat, but I must say that she is a very obedient dog and my command to stay with me was obeyed. Do you know what!!!! It worked!!! We spent a good 30 minutes observing the shoot and by the end of it Jade was quite happy to sit by my side and even appeared quite relaxed. All I have to do now is to get her over her terror of Guy Fawkes night!!! I have left you with more pictures of the pheasant shoot. 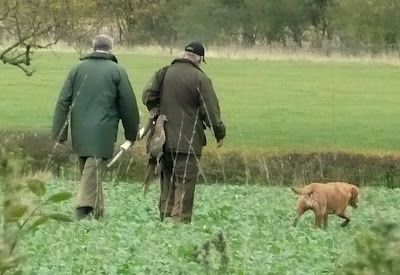 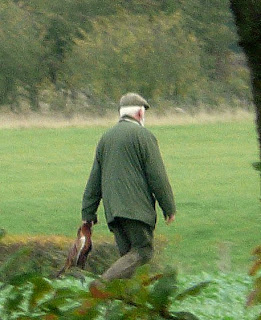 And finally. A lovely Autumnal shot of the changing leaves in Oak Wood. 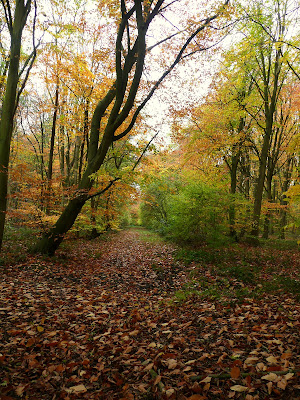 Posted by Ian and Irene Jameison at 6:05 pm

I took 4 bin bags of rubbish out of the car park at All Oaks Wood last week. Are you likely to be picking up any litter while you are there?

Well done Maffi, You made such a good job that, apart from 2 youths lounging about in their car and high on the beer and wacky backy, there was'nt a piece of litter to be seen!