We have a blockage...in the waste water hose! For several days a nasty pong had been coming from the sink drain hole. This motorhome has a waste holding tank which we can empty once we find a site with a drainage point. With the pong getting worse daily, today we did just that at a site near Ashbourne. With only a trickle of liqued appearing that was when we realised the hose was blocked. Much flushing of water through the pipe as well as giving the hose a good shaking got rid of most of the waste but we still feel there is more debris to come out. For now, the air is sweeter but emptying the holding tank more often is probably the way to go.

Having decided that we would go back to FS tomorrow (the Caravan Camping and Motorhome show is on in Birmingham on Wednesday and we bought tickets to go), we decide we may as well go see the Heights of Abraham iin Matlock Bath. I was worried about parking in this popular place but we snuck into the coach park as there was not a coach to be seen, and made our way to the cable car for the ascent up Masson Hill. Ticket price for seniors were £13 each but this included everything to see at the top. 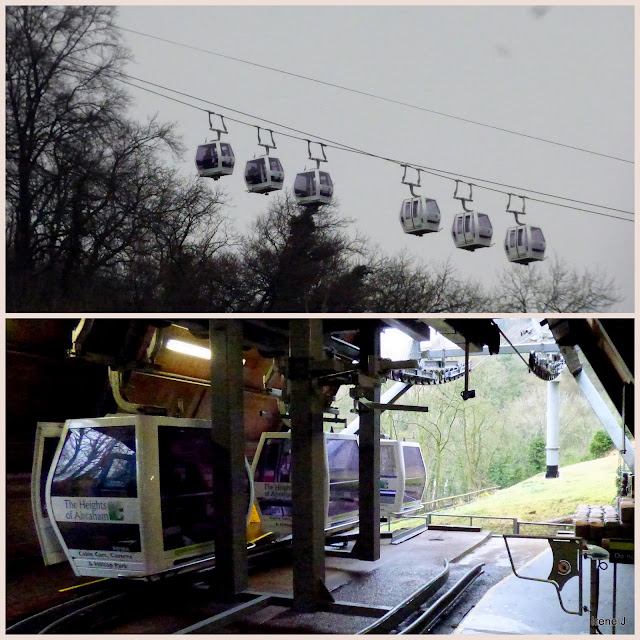 Trust us to pick the one day when mist shrouded the views, such a shame really because exiting from Masson Cavern which had been mined for the lead (170 steps up, 80 of which was a continues flight) the views would have been a sight to behold. 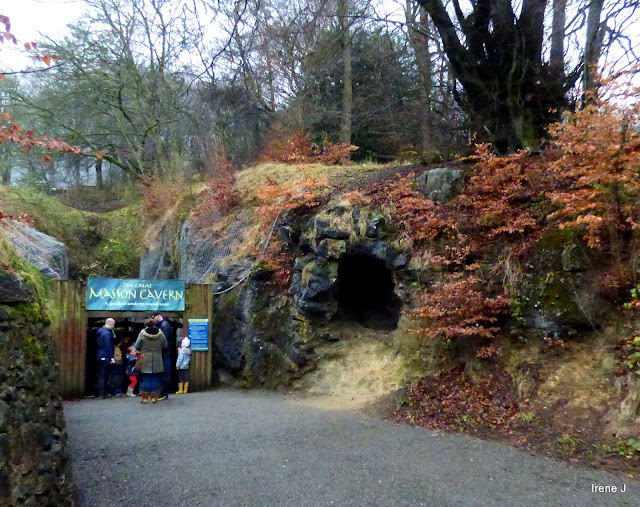 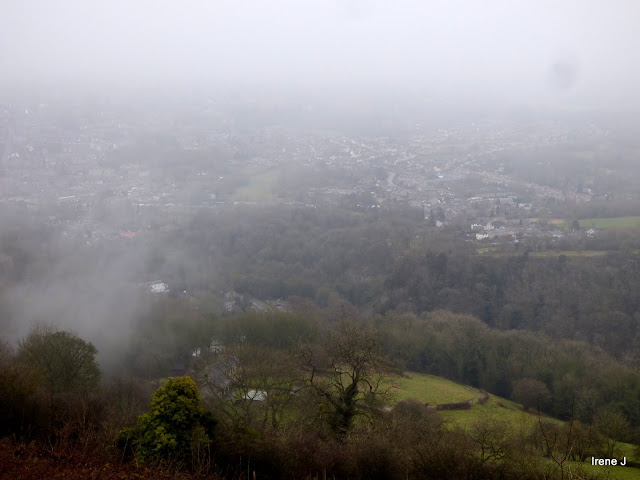 Rutland Cavern was also a lead mine and this was the second of the caves to see. Of course, this one happened to be way back down the hill and the tour was about to start. With 7 minutes to go Ian and I legged it down steep slopes and even steeper steps. We made it with a minute to spare and then found out we were the only ones on the tour! 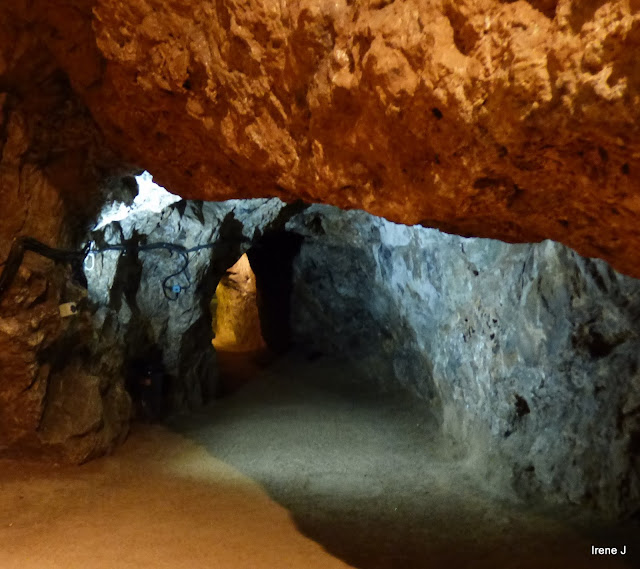 Most of this tour was on the level with just 6 steps up and 6 steps down. Glad about that as the old legs were still shaking after the strenuous dash down to the cave. Having missed certain points of interest on the way, gluttons for punishment that we are, we climbed back to the top for a look. Wish we hadn't because the only thing of interest was the moss covered trees and rocks and a carving of the 2012 Olympic torch. 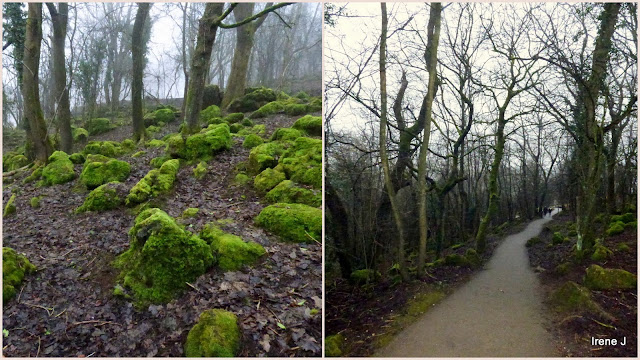 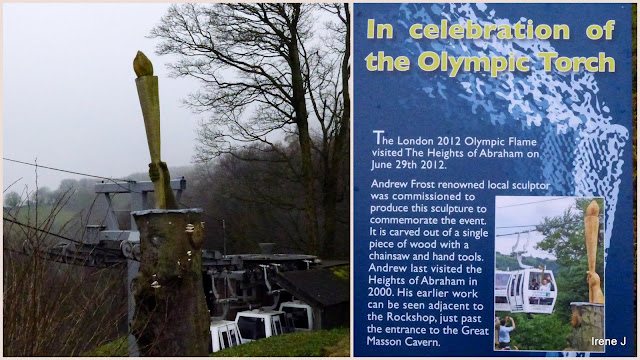 Tonight we are back on the same site in Ashbourne as yesterday. With 10 days worth of laundry to do (the machine on FS was already full of unwashed clothes before we left) I made the most of the washing machine and dryer on site. 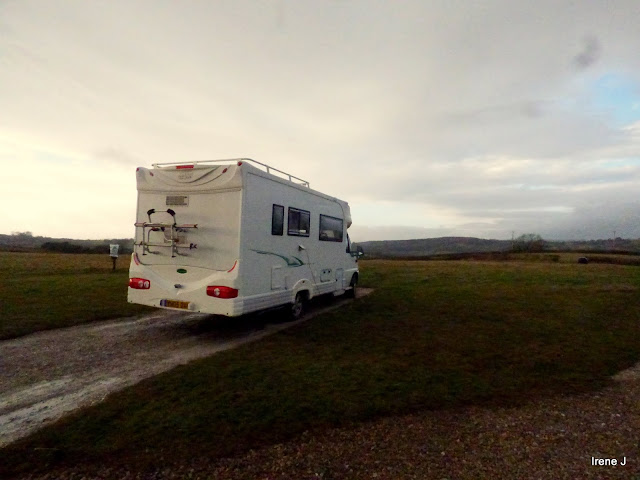 And this stunning sunset appeared at about 5.30pm. 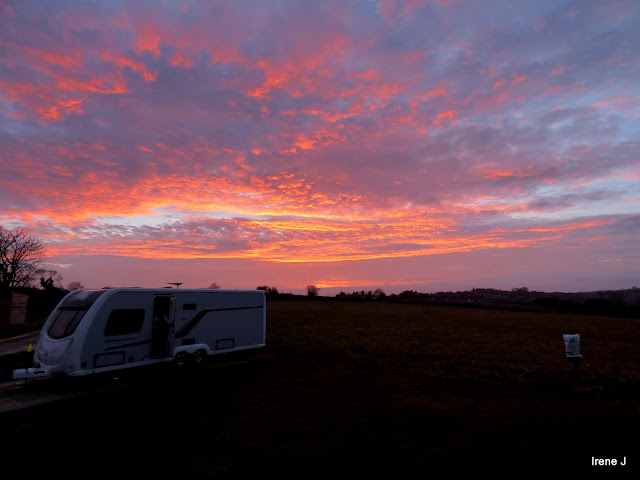 Posted by Ian and Irene Jameison at 6:30 pm

We did the trip to the Heights of Abraham on a visit to UK some years ago. Good fun, and very interesting, we thought. Thanks for the reminder.

Gorgeous pictures Irene. What an amazing place and I did have a chuckle thinking of Ian legging it down that steep bit. Glad he is steady on his pins.

For the drain pipes on your motorhome or boat, try sprinkling a generous Tablespoon of Bicarb of Soda down the drain. Then pour a half cup of cheap vinegar slowly down the drain. It will fizz like billyoh. Let it sit 10 minutes while you boil a full kettle. Pour the entire kettle of boiling hot water down the drain. Our bathroom sink plugged up and I realized I had not cleaned it since before Les died. It took four repeats of the process above before it completely unblocked. I usually clean all the drains on the boat once a month using this treatment which keeps them clear and sweet smelling.

Hello you mad two things - high stuff dangling on skinny string and climbing down into the realm of Hades! Nuts, I say...

An alternative to Jaq's bicarb and vinegar - that would have been my first choice until Dale the plumber told us of his successful waste tank treatment. Dale's remedy is to put a goodly measure of Napisan (do you have that in the UK? Crystals used for soaking and cleaning babies' nappies [the cloth variety - remember them?] I expect washing soda would be as effective) into a bucket, dissolve it in hot water and then tip it down the sink into the tank. Pour in more hot water, and then go for a drive, as many corners as possible. Come back and empty the tank. You will see all sorts of nasty looking stuff coming out ... It would also pay, while you are off on the drive to put the drain hose into said bucket re-filled with Napisan and hot water so it soaks and gets itself sorted while you are away. If you have a lid to your bucket you could take them with you so the pipe gets the benefit of sloshing water movement too.

David and I are trying not to put crappy stuff down the sink in the motorhome, esp after our friend Derek told us how smelly their tank is in Doris the Glampervan. Derek tends to chuck everything down the sink - fat from the frying pan, left over gravy, vege water etc. However we have adopted the habit of wiping out pots, pans, plates with paper towels, and putting them in the rubbish. That way we avoid mucky stuff going in to the waste water tank, and we use less water as we don't have to rinse things before washing them. We also wash the dishes in a basin instead of the sink, and then we can often throw the water under a nearby hedge - not today though as it is pouring with rain here in Blenheim!

Big hugs to you both,

Napisan...oh I remember it well. Soaking smelly nappies in a lidded bucket and that whiff coming from it as the lid was lifted....oh yes...remember it well! Not sure about using Napisan (Still available in the UK) but the idea of washing soda appeals. As for letting Ian behind the wheel whilst the soda works well... he doesn't need any excuse to throw the Beast round corners and I would fear for my crockery if I allowed him to do that! No, I shall take the wheel and do that sedately!

As Ian does all the washing up (I cook, he cleans, only fair)I blame him for all the bits of food down the sink. A washing bowl is now on my shopping list and finding a convenient spot near a hedge will be one of the decision to make when choosing a spot.

Yours (and Jaqs) tips have been gratefully appreciated so if you have any more? keep them coming.

Much love to you and David