Arriving at Trent Lock today I couldn't believe my eyes. A thick covering of what I first thought was Duck Weed. As it happened BW was sorting out the rubbish bins at the facilities so our first question was " Is this how it is all the way to Sandiacre?" Their reply? Quite probably! Then they told us that there was not a sign of the weed on Friday but when they arrived Saturday Morning there it was. They started harping on about how it took just one idiot to empty there fish pond in the canal with only the tiniest bit of the plant in, for all this to appear. Really!!! Did this happen in three days? Apparently not. This weed ( which by the way is not Duck Weed but Azolla Weed) has been on this canal for some time. The fast growth of the weed means it spreads rapidly, cutting off light for the aquatic plants and starving the water of Oxygen. Bad news for the fish. It is apparently an Aussie export so again we are invaded by foreign species. So what will be done about it? At the moment NOTHING!!!!! It needs another foreign species to get rid of it. The Weevil A box of the beetles can be purchased for about £350 but not knowing how many are in a box, BW doesn't want to spend the money. This weed will not go away. It will only get worse. Unless something is done then the Erewash canal is doomed. Another thing, Every time a lock full empties into the Trent it carries millions of the plant with it. So what do YOU think will happen next? I'll leave you to ponder over it. 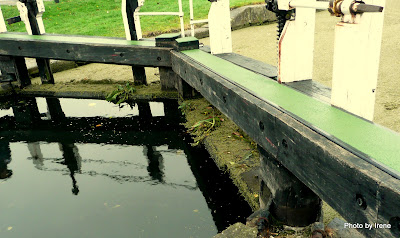 Posted by Ian and Irene Jameison at 8:35 pm

Hi Ian and Irene, We ventured onto the Erewash Canal early last month and the weed was there then, we got as far as Sandiacre Lock, but sadly turned back as the weed was so bad and the rubbish that had been thrown in the canal just sat on the top of it, it certainly put us off of the canal sadly. As well as us, two other boaters we met were put off. BW really do need to tackle it as it will become unusable. You can't even tell a boat has gone through it it just closes in behind you!