The one fish I really don't want to catch and now Ive caught another. This time considerable bigger then the excuse of one I caught a few weeks back See Post . Those of you that fish will realise just how lucky I was to land it when I tell you I was on 2lb main line with 1lb hook length and two maggots on a size 20 hook. The wind was blowing a gale and our mooring spot is just before the entrance to the park. Just behind us the canal narrows considerable because two huge bushes are overhanging the water. So now that you get the picture you will realise that as the elastic stretched  alarmingly and I fought to get in whatever had taken my bait, I suddenly became aware of two boats approaching but from opposite directions. "Oh help" I thought. How on earth was I going to land this before both boats arrived at the narrowest part of the canal. Then the fish surfaced and I saw it was the dreaded pike!! All I could think of was grabbing my landing net as quickly as possible and then bullying him towards it. Thankfully I managed to net him and pull my pole away from the coming boats just in time. I haven't a clue as to what would have happened if I failed in my task. Probably lost not only the pike but pole as well! Anyway I then had to unhook it. Not an easy task when they have teeth!!!! Thankfully I didn't have to try as the pike had managed to get rid of it himself. So, after breathing a sigh of relieve, I got Ian to take a picture just to prove that this was not a fisherman's tale!!! 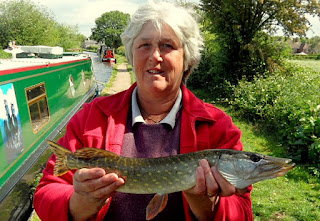 Posted by Ian and Irene Jameison at 3:00 pm

That is a great catch, well done.