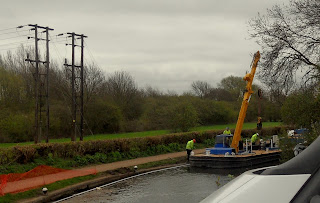 As we headed up the Erewash Canal, my mind wandered back to winter and 8 weeks of solid ice. Hopefully nothing would stop us getting back to our moorings this time. Well I was wrong! On leaving Dockholme Lock we realised that the pound was very low. Then some chap on his bicycle informed us that a crane barge was working below the next lock. Because of the water situation I decided to stop on the lock landing and send Ian on to discover what the problem was. 10 mins later Ian phoned to say they were repairing the landing at Sandiacre lock. Well we have lived in our bungalow by the lock for nigh on 7 years and as long as we can remember the coping stones have been submerged only to appear when the pound was low. So now finally the landing is being piled and then back filled with cement. BW told Ian that I should bring the boat up and they would move the barge. Fine! I slowly made my way to the lock and yes they moved the barge out of my way, but the space they left me was extremely tight and not only that I had to squeeze past an overgrown tree. MY PAINTWORK!!!!!!!!!! I was not amused!
.
We picked this lot up just reversing into our mooring! No wonder Ian had problems controlling the boat. 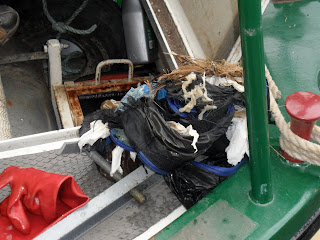 Posted by Ian and Irene Jameison at 8:11 pm